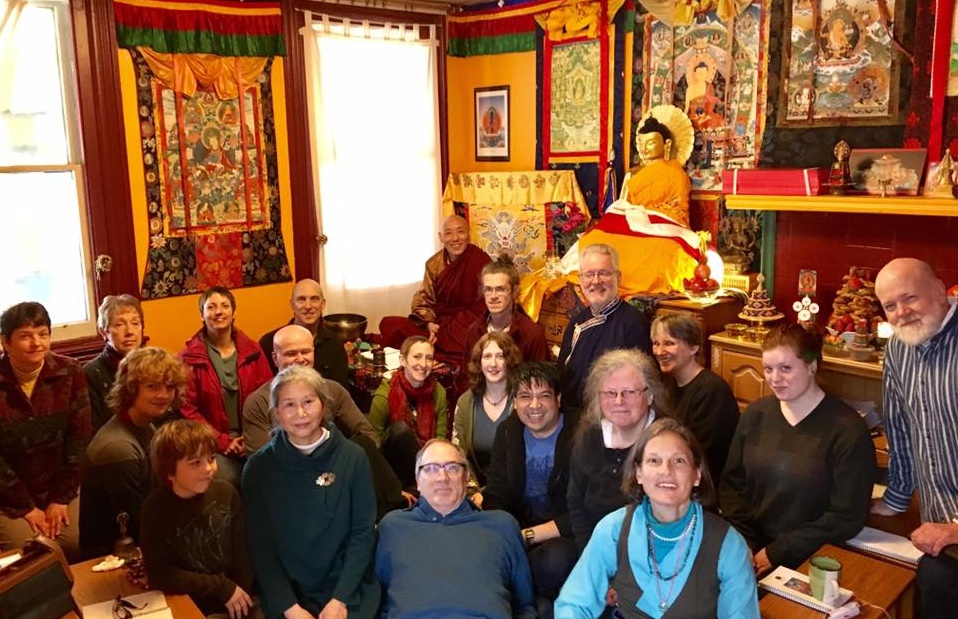 Three Rivers Tibetan Cultural Center came into being to expand the mission of the original Three Rivers Dharma, which began in Pittsburgh in 1993 under the spiritual auspices of His Eminence Khenchen Konchog Gyaltshen Rinpoche. In 2012, shortly after the arrival of our first full-time resident teacher and current Spiritual Director, Khenpo Choephel, the center incorporated as Three Rivers Tibetan Cultural Center and in 2013 received federal non-profit status.

Three Rivers Dharma/TRTCC has brought many Tibetan masters to Pittsburgh to give teachings, most notably co-sponsoring the visit of His Holiness the Dalai Lama in November of 1998 with the Pittsburgh Friends of Tibet and the Buddhist Society of Pittsburgh. His Holiness gave three talks here and touched the hearts of thousands.

With our incorporation we expanded our mission to include education about Tibetan culture. Lama Kalsang is an accomplished artist in traditional Tibetan ritual art, and we look forward to being able to resume workshops with him on art and other aspects of Tibetan culture when the center is able to fully reopen. We have also sponsored visits by practitioners of Tibetan medicine, celebrated Tibetan cultural events like Losar, and had workshops on language, calligraphy and even traditional foods, like tsampa and butter tea. Our library includes volumes on Tibetan language, art, history and culture. We believe the wealth of knowledge contained in Tibetan culture has much to offer to the world we are in now, and an important part of the center’s mission is sharing that.

The best way to stay in touch about upcoming teachings, practices, and special events is to be on the list to receive our weekly emails, which you can do by hitting Subscribe below.

Our Sangha group emails are supported by MailChimp and sent to you through this email address:

Saturday 5/28, 9am-12pm  Mandala Offering and Guru Yoga (in person and online)
Khenpo will offer Refuge ceremony to participants who may aspire to take the Refuge Vows

New Moon Purification Practice
Monday, 5/30, 7 p.m. The Sutra of the Three Heaps recitation and prostration (in person only)

Saturday 6/11, 9am-12pm
Teachings on POWA (in person and online)
Khenpo will offer Bodhisattva ceremony to participants who may aspire to take the Bodhisattva Vows