The lineage of our center is Drikung Kagyu, which is a sublineage of one of the four principal lineages of Tibetan Buddhism. In chronological order, starting with the oldest, the four lineages are Nyingma, Sakya, Kagyu and Gelug. These lineages are different branches of the same tree, rooted in the same ground. The four can be more easily understood with just a bit of history.

Although there are accounts of a basket of sutras arriving in Tibet at an earlier time, Buddhism was first established in Tibet during the reign of the Tibetan king Songsten Gampo in the 7th century C.E. Before that time no Tibetan translations of Sanskrit sutras or commentaries existed, partly because there was no written form of Tibetan. Songsten Gampo instructed one of his ministers to travel to India, study Sanskrit and develop a Tibetan alphabet. He then commissioned the translation of several thousand Buddhist texts into Tibetan. He built Buddhist temples, including the famous Jokhang Temple in Lhasa, and became known as the first of Tibet’s Dharma Kings.

In India during this time the collection of sutras, or teachings of the Buddha, continued. Great Buddhist universities were established, the greatest of which was Nalanda in northeast India. Scholars and monks gathered at these universities to study, debate and clarify the meaning of sutras that could otherwise seem somewhat opaque, beginning the commentarial tradition that opened and illuminated the sutras. The Buddhism that came into Tibet from India beginning in the 7th century was the fully ripened fruit of the Nalanda tradition. Centuries later, after Buddhism was pushed northward and out of India by the Mongol invasions of the 13th century and the great Buddhist universities were destroyed, Tibet is where the Nalanda tradition remained intact.

In Tibet the second Dharma King, Trisong Detsen, came to the throne in the late 8th century. Trisong Detsen brought the tantric master, Padmasambhava (Guru Rinpoche) to Tibet from India, along with the great Nalanda scholar and master, Shantarakshita, and more than 100 other Indian pandits. Guru Rinpoche is revered as one of the original springs from which Buddhism flowed into Tibet. The first Tibetan Buddhist monastery, Samye, was established. Buddhism began to grow and flourish in Tibet. That growth continued into the 9th century, as the Tibetan empire was stabilized by a treaty with China and successive kings continued to support and promote Buddhism.

The teachings that were accumulated, translated and taught during this earliest period of Buddhism in Tibet, from about the 7th through the 9th centuries, became known as the Nyingma school, the first and the oldest of the Tibetan Buddhist lineages. Padmasambhava, Guru Rinpoche, is regarded as the founder of the lineage.

In the 9th century a king named Ralpachen came to the Tibetan throne. Ralpachen’s efforts to strengthen Buddhism in Tibet took a different form, including the levy of heavy taxes to support the monasteries and the exercise of arguably oppressive power on their behalf. The backlash arrived with Ralpachen’s successor to the throne, Langdarma. Langdarma stopped taxes from being diverted to Buddhist monasteries and disbanded or destroyed many of them. The practice of Buddhism was repressed, and the monasteries that remained were largely deserted. One thing Langdarma apparently did not do was destroy the monastic libraries. For over a century after Langdarma, Buddhism nearly disappeared in Tibet.

Langdarma was the last king of the Tibetan empire. During this period internal and external pressures resulted in the Tibetan empire falling apart and separating into different kingdoms and centers of power. This period in Tibet, from about the late 9th to early 11th centuries, is sometimes referred to as The Era of Fragmentation.

In the 11th century a monk-king from the southwestern kingdom of Gugé, a grandson of Langdarma, was determined to revive Buddhism in Tibet. This monk-king was Yeshe O. He essentially gave his life to find the greatest Buddhist scholar in India and bring him to Tibet. That scholar’s name was Atisha, and he arrived in Tibet in 1042 C.E. His teachings are contained in a text he wrote on what was called the Lam Rim, or gradual path to enlightenment.

This period, beginning with Atisha’s arrival in the southwestern kingdom of Gugé, is sometimes referred to as the Second Diffusion of Buddhism in Tibet.

With Atisha’s arrival Buddhist teachings again began to flourish in Tibet, and different lineages began to coalesce around great teachers. The three lineages that were established after Atisha — the Sakya, Kagyu and Gelug lineages — are sometimes called the lineages of The New Translation School. The Sakya and Kagyu lineages arose within about a century of Atisha’s arrival in Tibet. The Gelug lineage came three centuries later.

Sakya, sometimes referred to as the “Scholastic School”, was founded by Khon Konchok Gyalpo in about 1070, less than 30 years after Atisha’s arrival in Tibet. The leaders of this school have been from a single aristocratic clan, the Khon. So it is the only dynastic lineage in Tibetan Buddhism (though the rules of succession were modified very recently).

The Kagyu lineage was established by the Tibetan master Gampopa in the early 12th century, within a century of Atisha’s arrival in Tibet. Gampopa integrated Atisha’s lam rim teachings with the more experiential mahamudra teachings of the great Indian mahasiddha, Tilopa (988-1069), which Gampopa had received in an unbroken line of transmission from Tilopa through Naropa, Marpa and Milarepa. That line of transmission continues unbroken to this day.

Drikung Kagyu, the lineage of our center, is a Kagyu sublineage. The Drikung Kagyu school was established by the Tibetan master, Jigten Sumgön (Skt. Ratna Shri). The direct link between Gampopa and Jigten Sumgön was the great master Phagmodrupa, who received teachings and transmissions from Gampopa and transmitted them to Jigten Sumgön. In 1179 Jigten Sumgön followed a female yak, or dri, in looking for a place to establish a monastery. Where she chose to lie down is the place he chose for the monastery. It was called Drikung Thil. The valley was called the Drikung Valley. And the lineage was called Drikung Kagyu. Jigten Sumgön wrote a text known as the Gongchig that the 8th Karmapa regarded as the definitive text for the entire Kagyu lineage. His emphasis on mahamudra may be seen as deepening the experiential dimension of the Drikung Kagyu lineage.

For a deeper look at the Drikung Kagyu lineage, see, drikungdharmakirti.com/lineage/kagyu-lineage.

Gelug. Three centuries after Atisha a Tibetan master, Je Tsongkhapa (1357-1419), who had studied in Nyingma, Kagyu and Sakya monasteries, combined the teachings into a “new approach” that was more structured and placed greater emphasis on logical reasoning. Tsongkhapa also referred to his approach as the Lam Rim, reflecting the gradual path teachings of Atisha, which Tsongkhapa further developed and promoted. This caused Tsongkhapa’s teachings to be regarded initially as part of the Sakya lineage. But with the breadth and extent of Tsongkhapa’s writing, which covers 18 volumes, it became clear that he had actually established a new lineage. This lineage became known as the Gelug lineage.

There is much discourse back and forth among the lineages. Many Kagyu masters, including His Eminence Garchen Rinpoche, Her Eminence Khandro Rinpoche, and Yongey Mingyur Rinpoche, hold both Kagyu and Nyingma lineages. Our own Khenpo Choephel studied debate at Drepung, a Gelug monastery. These are branches of the same tree, all rooted in the same ground.

Saturday 2/4, 9 am
Vajrasattva practice (online and in person) 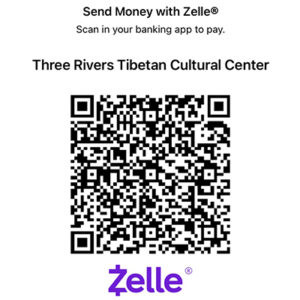 Send to this email for Zelle donation: